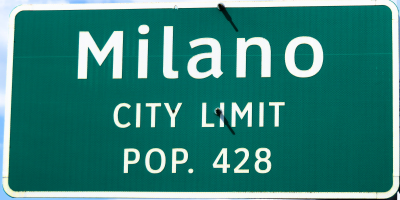 The International-Great Northern Railroad Company laid out the original site of Milano in 1874, about a mile and a half west of the city's present site. A United States post office opened there the same year. Soon, a Baptist church was also established in the area. The community around Milano became a voting precinct in 1880.

Local sources offer several possibilities for the origin of the name "Milano." One story suggests that the town was simply named after Milan, Italy, because of similarities in the climate, but truly, the climate of Milan in Northern Italy, is cold and continental; another says that the name was supposed to have been "Milam," but the United States Post Office Department either got it wrong or changed it intentionally because another Milam, Texas, already existed.

Nevertheless, when the Gulf, Colorado and Santa Fe Railroad Company built the section of track between Brenham and Belton in 1881, it established the town of Milano Junction at the railway's intersection with the International-Great Northern, about two miles east of Milano. As the focus of social and economic life shifted to the new town, Milano became "Old Milano" and Milano Junction became Milano. By the late 1880s, Milano was a commercial hub, with 500 residents, and served as a shipping point for cotton and hides produced in the area. Truck farming became an important industry for Milano in the 1920s, with tomatoes, watermelon, and cantaloupes as the principal crops.

The small city of Milano reached its population peak in 1939, when approximately 920 residents were reported to be living there. The number of local residents began to decline in the early 1940s, and fell to a low of 380 by the early 1970s, before beginning to grow again in the late 1970s. By the time Milano was finally incorporated in the early 1980s, the city officially had 468 residents.